Glacier National Park actually extends into Canada.  No borders for these mountains and lakes!  In Canada, it is called Waterton Lakes National Park.  I took a short side trip north to visit Waterton, spending the most part of two days and one night there.  As you drive into town, right at the visitors center is the trail head to “bears hump” trail.  Short but steep, when you reach the top, it offers a spectacular view of the town and Upper Waterton Lake as well as the surrounding mountains. 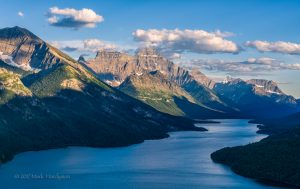 This is a single image taken about as hour before sunset from the top of bears hump.  Looking south down Upper Waterton Lake, directly into the U.S.  As a matter of fact, the lower half of the lake is actually in the U.S.

From the lakeshore at sunrise the next morning.  Gives a whole different perspective of the lake and surrounding mountains.  The lake shore and bottom are covered with the most colorful stones and the water is about as clear as any body of water I’ve seen!

Go back to sunset on the lakeshore, turn around and you’ll see the famous Prince of Wales hotel.  Built between 1926 and 1927 by the Great Northern Railway in an attempt to attract tourists during the prohibition years.  It was named after the Prince of Wales, trying to lure him to stay there during his 1927 visit to Canada.  Didn’t work though, he stayed at a nearby ranch instead.  Still a beautiful setting at the waters edge and is listed as a National Historic Site.

This entry was posted in Glacier Nat. Park, Landscape, Traveling.