When I visited the grand canyon two years ago, I heard stories about a place on the north rim, about 55 miles west of the north rim headquarters, called Toroweap.  After seeing some images from there, I knew I had to go there someday.  Problem is, it’s extremely difficult to get to, 60 miles from the nearest paved road, the only access is by 4 wheel drive, high clearance vehicle on an only slightly improved sand and rock road.  This proved to be a problem 2 years ago.  The park service has a list of warnings as long as your arm, with numerous stories of multiple flat tires, stuck and high centered vehicles.  Not for the faint of heart!  However, on this trip, we found a guide out of Kanab, Utah by the name of Will James, owner of Dreamland Safari Tours, who we hooked up with for the next two days.  He’s been there many times and has all the equipment and experience we needed.  Problem was, nobody can predict the weather.  As we traveled from Monument Vally west to Kanab to meet Will, the rain began.  When we arrived, he basically asked if we wanted to go ahead with the trip in spite of the rain.  Well, both Steve and I really wanted to see Toroweap, and we had come a long way, so as I used to say, press on regardless!!  Off we went, south toward the grand canyon in a downpour.

3 1/2 hours later, we arrived at our long anticipated destination ….. and it started to rain harder!  We donned our rain gear and ventured to the rim only to have lightning strike not far from where we had parked, so back in the truck and back up the road for about 3/4 mile where we were to set up camp.  The three of us then spent the next 4 hours sitting under a rock ledge getting acquainted and telling stories, when we noticed the sky clearing off to the southwest.  Could it be????  Not too long after, the rain had virtually stopped so we grabbed our gear and headed out. 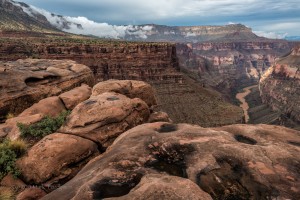 Our first look at the grand canyon from the Toroweap overlook!  The canyon walls here are at their closest at “only” a mile apart, where as east of here where most people visit it’s 12-15 miles apart.  And although not as high as Bright Angel point, 3000 feet above the colorado river vs 8000, the walls are almost vertical.  This creates an incredible feeling when you stand at the edge! 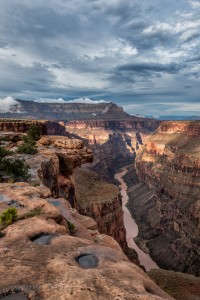 This may give you a better idea of the feeling looking down at the river!  As you can see, we got extremely lucky to have the skies clear out before sunset, with low clouds an fog draped over the peaks nearby. 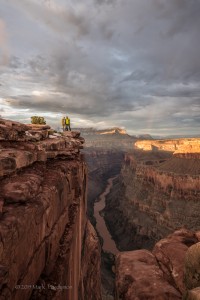 Just a little more to your left!!

Look to the right of us carefully and you can see the beginnings of a rainbow!!! 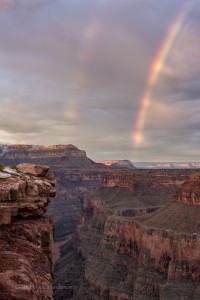 As time passed, the colors brightened and a second one appeared.  For the day starting out like it did, we couldn’t have asked for anything more! 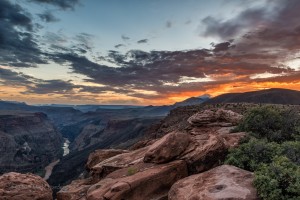 All the previous shots were looking east, up river.  As the sun continued to set we turned our attention down river to the west.  Could not have asked for a better day, rain and all!

The photos are pretty spectacular, but honestly only give a tiny taste of what it’s like to stand on that canyon rim with the colorado river 3000 feet below, a day I’ll never forget.

Please do click on these images to see them bigger!