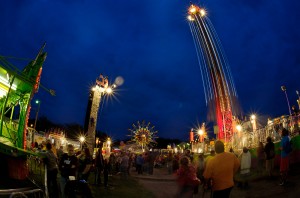 The county fair season is just about to close but the Delaware County fair opened last night so Deb and I decided to take advantage of the nice evening and hit the fair with our cameras in tow.  Much to my chagrin, upon arrival, I find I’ve left my tripod bracket at home.  Well, luckily Deb came to the rescue having brought both her camera bodies and both having brackets on them, but then we didn’t have an allen wrench with us either.  Nothing like being prepared, right?  Well a trip to the fair office and amazingly enough they had a set of allen wrenches, so all was not lost, I could use my tripod after all!  Once night fell we had a blast shooting all the brilliantly lit rides.  It was a good exercise playing with shutter speeds, seeing how we could bend the light around.  It’s funny, looking at some of these photos, you’d think these rides were going around at about 10,000 miles an hour.  I can assure you, the ferris wheel and marry go round didn’t even approach those speeds.  But with a six second exposure, it sure looked like it.  Finally toward the end of the evening, while munching on some fudge (yes, we succumbed to the lure of the fair food!), the light bulb went off and Deb said “zoom blurs!!!”  Well duh, so it was back around to some of the rides zooming in and out with the long exposures.  Now we were really bending the light.  There’s a short slide show in the image above, so go ahead and click on it and take a gander at all the pretty lights.  Don’t forget to hit the full screen button on the player, it makes ’em much bigger.