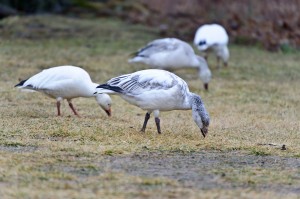 We’re on a mini road trip to Eastern Pennsylvania, more specifically the Middle Creek PA. Wildlife Management Area.  This is the time of year when most of the birds that have migrated south for the winter months are now returning to their summer, breeding homes.  In this case it’s the snow geese heading back north to eventually reach the arctic tundra.  It’s a long trip so there are rest stops along the way, one being right here in eastern PA. 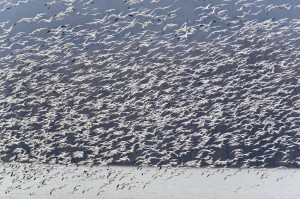 We arrived late this afternoon on a sometimes rainy and grey day.  The loop road around the wildlife area won’t open until tomorrow but there is access to one point on the impoundment pond where we could scope what was going on.  It was later in the day so the snow geese were heading back to the pond for the evening after spending the day foraging for food in the neighboring farm fields.  They came in in massive waves, one after the other, landing in the pond with all their mates.  Occasionally you would get a blast off, which is what you see in the photo above, where everyone gets a little restless and the bunch take off, circle around a bit then land back in the water.

Tomorrow is supposed to be better weather wise, so we’re hoping for a west wind and clearing sky in the morning.