Another iconic venue of the southwest is Mesa Arch.  Located in Canyonlands NP, about 25 miles from Moab.  Typically there might be upwards of 20 or 30 photographers there to shoot sunrise.  Knowing that, we headed out from the hotel at 4:30 this morning!  Expecting the worst, we were pleasantly surprised to be the second car in the parking area at the trail head.  Ultimately there were only about 4 of us seriously trying to photograph the arch.  It’s not really very big so space is at a premium.  We were able to pick our spots with no trouble what so ever.  The idea is to get the sun lighting up the bottom of the arch to a rich orange glow. 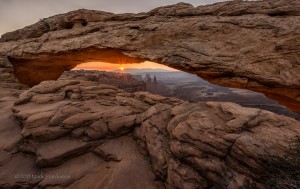 It’s also nice to get the sunburst as it breaks the horizon.  There’s just a bit of light on the underside of the arch. 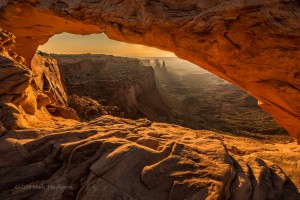 After the sun was above the arch we went for a little different angle.  I think this shows off the bottom really well as well as highlighting the valley below.  It’s a spectacular view that no photo can do justice to.

There’s so much to share but I’m running low on sleep about now so this is all I’ve got for right now.  We’ll be “off the grid” for the next two nights as we head to Toroweep at the north rim of the grand canyon and then to a place called white pockets.  Camping both nights as they are both quite remote and hard to get to. 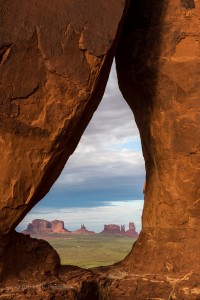 Ok, one little “peak” from this afternoon.  We’re in Monument Valley until just after sunrise tomorrow when we head to the grand canyon.  Lots going on and much more to come!