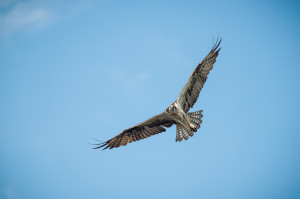 Ok, so this wasn’t taken right outside in our woods.  I was in North Carolina last week fishing with my brothers, and as you can see Mrs. Osprey was doing a little fishing too. 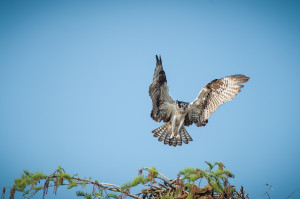 Her nest was in the top of one of the Pond Cypress trees out in the middle of the lake and early in the week she would leave her nest whenever one of our fishing boats would pass by.  As the week went on she became much more used to our moving around the lake and would just fuss at us from her nest.  Great show though early on.  I could just watch for hours as they would fly around the lake and hover always with an eye to catching dinner.  Unlike us, however, they weren’t catch and release, but catch and eat!