Falconry – The Sport of Kings

I was most fortunate to be invited, with some friends, to take part in a day of Falconry.  A completely new experience for me and most of my friends.  What I originally thought was going to be an hour or so of someone showing us the basics of this ancient sport, turned in to an incredible, hands on lesson and history of falconry.  We met at a private facility near Hoover Reservoir and were introduced to Joe Dorrian, who in 2014 founded The Ohio School of Falconry.  The school is licensed at both state and federal levels providing a hands on learning experience.  And believe me, in that relatively short time we learned so much about the history of the sport, the birds and the handling of these magnificent creatures. 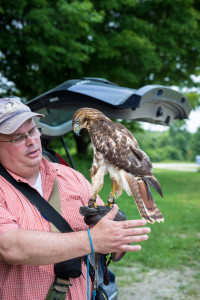 This is Joe introducing us to Chase, a red tail hawk.  These birds can be found everywhere throughout central ohio, many perched on light posts along the highway.  The hawks, like the falcons are birds of prey, and in some places falconry can also be referred to as “hawking.” 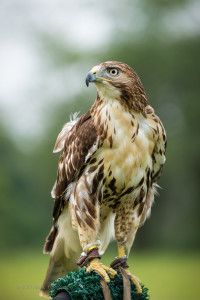 I’ve spent a fair amount of time just watching these guys circle above looking for prey but to be able to be so close and actually hold one of these magnificent birds was such a privilege.  Some may see the the anklets and bells on the feet and think how cruel can this be.  In reality every one of these birds was docile and completely comfortable with all of us.  When they were put back into their boxes, there was no hesitation, they just jumped right back in.  The other thing to remember, these birds live to hunt.    In order to survive they must feed, and to do that they hunt.  What the falconer gives them is the opportunity to do this while being fed and cared for daily.  One of the interesting things we learned was that Joe actually uses his birds to hunt varmints that may be damaging to a farmers fields.  He actually works the birds, as they would be doing anyway, ridding unwanted and damaging small animals. 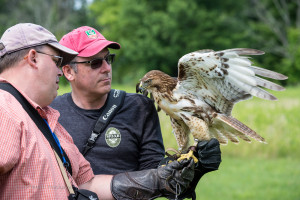 Here Joe is transferring Chase onto my friend Steve’s glove. 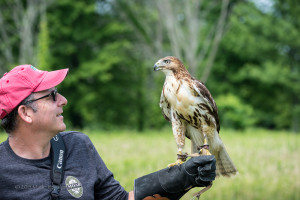 As you can see, they get along just fine! 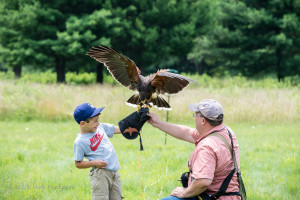 Here Joe is working with Sam. This is one of Joe’s Harris Hawks.  If you look closely in the background, you will see where Ki-Lo was perched.  When Joe calls, knowing there was a bit of food in Sam’s glove, he flew straight over and landed. 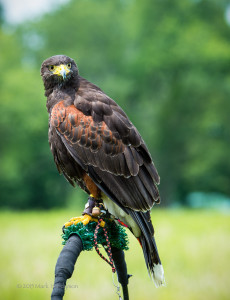 Ki-Lo, a Harris Hawk.  These birds are not native to the midwest but are found primarily in the southwest. 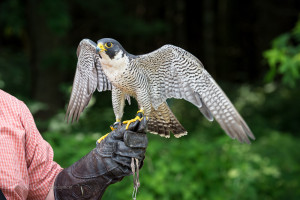 Peregrine Falcon – the bird most people would identify with falconry.  The peregrine is a sleek and powerful bird often considered the fasted bird on the planet.  The peregrine hunts mainly medium sized birds from high above, tucking their wings in and putting themselves in a dive, striking their prey with closed fists.  Joe said that one peregrine was clocked at 240 mph in a dive.  Speed and power!  This is Frightful, the newest addition of Joe’s.  He’s going through training now and won’t be flown with the school until fall. 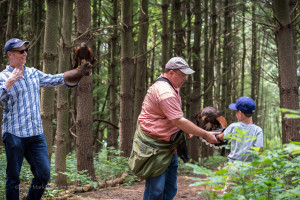 We were also able to take the pair of Harris Hawks out into the woods.  As we walked along the paths they would follow, flying from tree to tree.  They stayed pretty close, although once or twice became distracted by a chipmunk or two.  Here Sam and his dad John do the double with both hawks. 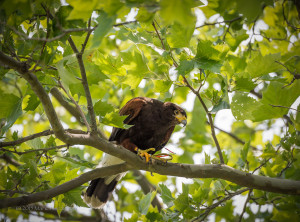 On our walk in the woods, the hawks looked right at home in the trees.  The two harris hawks were named Ki-Lo, the male and Sedosa, female.  As with most birds of prey, the female is about 1/3 larger than the male.  Unlike song birds where the male is the more colorful of the species, size is the way to tell the boys from the girls here.  That being said I honestly can’t be positive of who’s who in the images.  You might also notice a small piece of orange wire attached to the anklets.  This is a miniature transmitter.  When hunting with these birds in tall grass or farm fields you can lose track of them when they go to the ground.  With a small receiver Joe carries, he can always get close enough to hear the bells on their feet.  That way nobody gets lost. 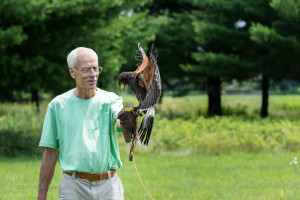 A perfect landing!  Doug and a harris hawk. 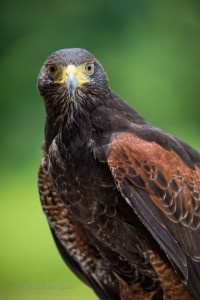 A huge thank you to Joe Dorrian for putting together an incredible day for all of us.  As mentioned earlier, Joe is the founder of The Ohio School of Falconry.  His website is a wealth of information so be sure to visit, and someday maybe you can look eye to eye with one of his birds of prey!

Lest I forget, also a huge thanks to John and Samuel Frank for putting this whole thing together, Thanks!!

Be sure to click on the images to see them bigger!!