We had scheduled a lot to see today, covering quite a bit of ground from Inverness to Skye.  I should say, that was the idea, anyway.  The first little glitch came not to far out of Inverness when we took the wrong junction and ended up cutting a big part of our loop along the north coast.  The funny part is, we didn’t discover this until we reached Loch Maree.  You see, we shouldn’t have reached there for another couple of hours!  I may drive fast sometimes, but not that fast.  The road we were traveling on is a big loop and we picked it up at the wrong end.  As a friend of mine often says – ya gotta love it!  So we just figured it will give us more time to spend in other places!!

The road leading down into Kinlochewe, the water in the distance is Loch Maree.  Not a bad view.  I have to say that the landscape here is just stunning.  Add to that the wonderful skies we had today, from broken puffy clouds to misty cover of the mountains.

From there we headed southwest to Torridon, a small hamlet on Loch Torridon, just a collection of houses really.  We stopped for tea at the general store and met a couple from Vermont.  She’s a landscape architect who has actually done work at the Franklin Park Conservatory in Columbus!  Small, small world!  From there we headed to what our waitress last night called “the most dangerous road in Scotland.”  A 35 mile single track road from Shieldaig to Applecross then over the cattle pass to Lochcarron.  Applecross is considered one of the most remote towns in the UK.  Probably 2 miles in, we discover our left front tire is going flat! I’m pretty sure I know which hole in the road I hit as it was quite a jolt. 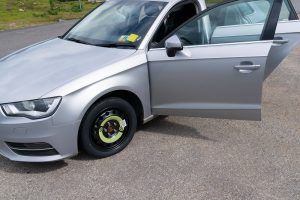 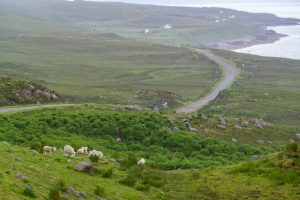 Just an example of the road to Applecross.  Single lane with little turnouts for passing.  Coordinating with the opposing driver can be a little tricky, but everybody seemed to be used to it and were quite polite and accommodating.

This is the end of the road over the cattle pass, a spectacular drop with several very tight switchbacks in the road.  That’s Loch Carron at the bottom of the road.  The town of Lochcarron is on the opposite shore and we actually found a shop, probably the only shop, that had a tire our size!!  So after a sandwich in the hotel next door, James had our new tire mounted and on the car.  Heading south out of Lochcarron we had one more stop before the Isle of Skye. 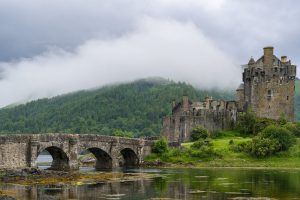 Eilean Donan Castle.  Said to be the most photographed castle in Scotland, I felt an obligation to add to that notion.  It really is most interesting in that it sits on an island, connected by a stone bridge.  The castle was essentially a ruin that was restored between 1912 and 1932. 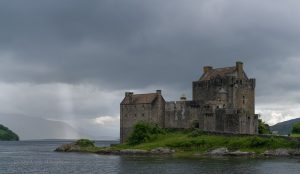 Other than Bamburg Castle, which you will see later in another post, this is the coolest castle we’ve seen in this land of castles.  So ends a long epic day with sights that were unbelievable.  This will be a day we remember for a long long time!

And now for the gratuitous puffin picture of the day.  Just for fun! 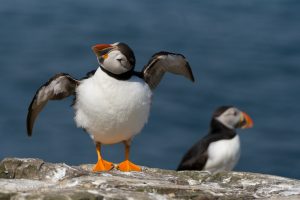 This entry was posted in Birds & Wildlife, Landscape, Scotland, Traveling.