By Golly, They’ve Flown the Coop! 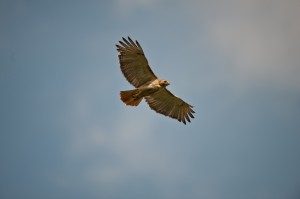 Ok, this one’s not one of the babies, excuse me, hawklings.  This is dad, or at least I think so circling around the nest keeping a close eye on that guy down there with what looks like a bazooka.  Shoot he’s pointing it right at the nest.  That would be me, with that big honking lens trying to get a shot of one of the hawklings flying around in that big sycamore tree. 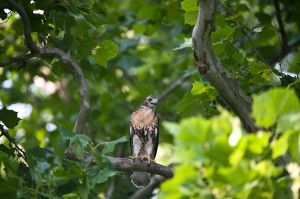 So here he is.  Ok, he’s not flying, just hanging out, but he was making small flights from branch to branch.  And squawking at me quite a bit.  I’m guessing this is a male, don’t know for sure and saw no signs of his sibling this evening. 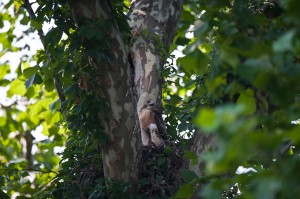 Mom, or so I think, was in the nest having a snack.  Couldn’t see what she was eating, but she certainly was tearing up something mighty tasty. 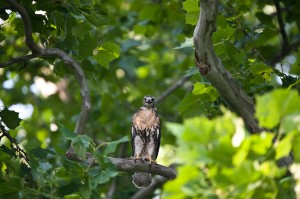 Meanwhile, junior was still just hanging out, giving me the evil eye.  Right after this, while I was focusing on Dad flying around above us, junior took off toward another tree.  Of course I wasn’t ready for that, still watching Dad, so no in flight shots of the little ones……yet.  You could tell he was still flying on his learner’s permit, his landing in the other tree was less than graceful, but he made it.  After a bit, off he went right into the setting sun.  Not a particularly good photo op. 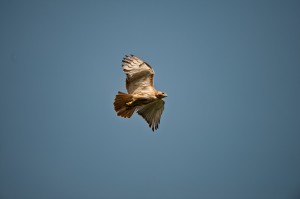 Dad’s still flying around, checking out the strange guy on the ground.  Sorta looks like he’s ready to dive bomb and carry me away.  At this point enough was enough so I beat it out of there so as not to disturb them too much.  They have been quite good at putting up with all this publicity, don’t want to push my luck!

Please click on the above images, they really look much better bigger