It seems that at this time every year, I find myself out west.  This year making my first visit to Yosemite National Park.  To quote Sierra Club founder, John Muir, 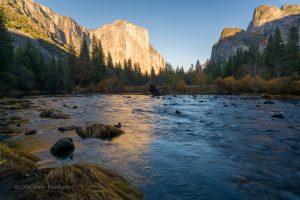 A view of the Merced River flanked by one of the parks icons, El Capitan.

Two years ago on our Antarctica trip, I had the privilege of meeting William Neill, a wonderful photographer who has spent 40 years working in and around Yosemite.  In the early 1980’s he worked with Ansel Adams at Ansel’s gallery in Yosemite.  I was able to arrange to spend the day with Bill photographing and learning some of the special places within Yosemite.  For me, it was a real treat to spend my first day in Yosemite with Bill. 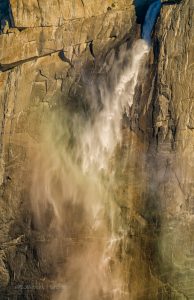 Upper Yosemite Falls.  In the spring, most of the waterfalls run at their highest with the snow melt and spring rains.  With a little rain in the last couple weeks, I was lucky to see that most of the waterfalls were running.  This view is a tight shot of the top of the falls just as they break over.  The wind was blowing the water out and to the side which when the sun hit would bring out the subtle colors just as a rainbow would. 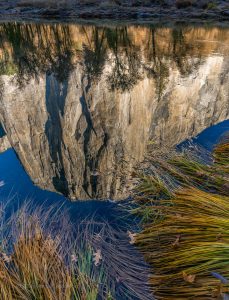 A different view of El Capitan as a reflection in the Merced river. 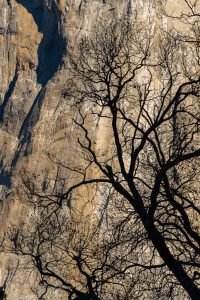 You’re going to see more of this kind of image, as well as the one above, over the next few days. I’m really liking the idea of zooming in for these detail shots.  They show a lot of texture and tell a whole different story of the park.  Another thing I’ve discovered in processing these is almost all, while very beautiful in color, make outstanding black and white images.  Being a big fan of B & W, I’m pretty excited about that.  So with that, the next image which I saved for last was actually the first image of the day today…. and it’s black and white.

There’s a story behind this.  A couple weeks ago I started wondering what the night sky would look like while I was out here.  Lo and behold the November full moon was to fall on the day I arrive, lucky me!  Then last week, all the hoopla about this being a “super moon”!  When I arrived yesterday, I went straight to Glacier Point as I thought this would give me a nice view of Half Dome with the full moon.  Problem was, the moon reached it’s max on Monday morning just before it set.  What that means is on Monday evening, the sun set about 45 minutes before moon rise which yielded an extremely bright moon and an almost completely dark landscape.  Even though your eye and brain can see and process the bright lights and the dark darks, it’s hard for the camera to capture it.  Needless to say, what I ended up with was disappointing.  It was however, really special to see that big moon rise slowly above the horizon in such a special place.  So after leaving the hotel this morning as sunrise approached and the sky began to lighten, we saw that big ol’ moon just as it was setting.  This time, moon set was after sunrise so we had the opposite of the night before which made for this image.  A fire many years ago scorched this part of the mountain leaving behind the trees you see here, almost a “moonscape” look, that coupled with the setting moon and the black and white conversion makes for a striking image!