As I’m sure most people are aware, the transit of venus across the sun was a twice in a lifetime event for most people today.  The last was eight years ago but the next won’t be until 2117. 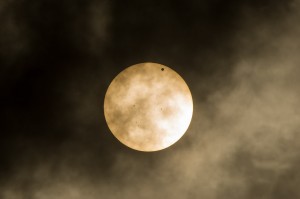 Well, here it is.  That small dot in the upper right corner of the sun is venus.  You would think that clouds would be really bad for an event like this, but that was the only way I could have gotten these images.  I didn’t have a filter to put on the lens, but the fact that there were some thin clouds passing over the sun allowed me to shoot these.  I was shooting at f32, which means I have the lens aperture closed down as small as it gets, a really tiny hole and the shutter speed was at 1/8000 of a second……really, really fast!  Those two things combined to make a bright scene, the sun, darker.  These were shot with a 600mm lens with a 2x teleconverter for an effective focal length of 1200mm. 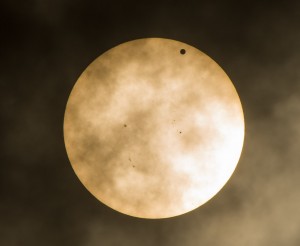 Here is the same image but with a pretty healthy crop.  In it you can see venus a bit better as well as some sun spots, which are the other dark spots.  At this point the clouds pretty much dispersed so it was way too bright to be looking at or photographing the sun, it was dinner time anyway.  I thought that as the sun set I might get another chance though. 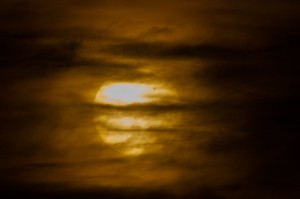 It would have been really neat except too many clouds drifted in right before sunset.  This was as good as I could get and you can see that venus has moved a little lower and a bit toward the center of the sun.  It was certainly fun while it lasted, had I found out about this event a little sooner I would have tried to get a hold of some filter material which would have allowed me to shoot right at the sun in a clear sky.  Oh well, maybe next time…. or maybe not.

Be sure to click on the images to see them bigger!