We have reached our southern most point in the trip here in the Yalour islands.  This spot rivals everywhere we were as the most scenic and beautiful.  The weather may have played a role in that as you can see it was another perfect day in paradise!

A little history now.  the Yalour Islands are a group of islands and rocks about 1.5 miles long.  they were discovered and named by the French Antarctic expedition of 1903-05 under J.B. Charcot.  They were named for Jorge Yalour who commanded the Argentine corvette Uruguay, which came to the rescue of the Swedish Antarctic expedition in November 1903.  Certainly seems appropriate enough. 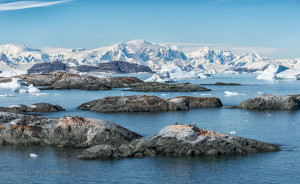 As you can see, the area is made up of a bunch of “island” rock piles, some of which are home to the Adelie penguins.  This was our first encounter with these little guys after loads of Gentoo and Chinstrap penguins. 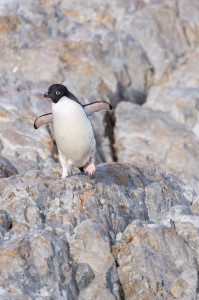 The Adelie Penguin breeds further south than any other penguin and along with the Emperor is the only true Antarctic penguin.  It is distinguished by the blue-black head with the eye ringed in white.  The classic “little man in evening dress” is well adapted to the snow and ice.  They have typically dense colonies on ice free slopes usually not far from open water in the months of January and February when their chicks are in need of food.  As you can see in these photos the place was loaded with the little grey puff balls – chicks. 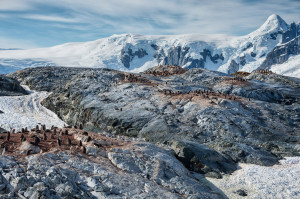 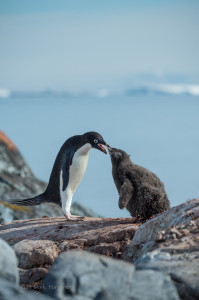