the night of opposition

Tonight, the planet Jupiter is as close to Earth as it ever has been, maybe as much as 75 million kilometers!  It is called the night of opposition because Jupiter will rise, or at this point has risen, opposite the sun at sunset and will rise up overhead by midnight.  It is the brightest object in the night sky, except of course the moon, which is approaching full tonight.   I’m out playing with the camera, shooting some more photos of the moon and I notice this really bright object – Jupiter!  Looking through the camera I can even see four of Jupiter’s moons aligned with the planet at a slight angle. 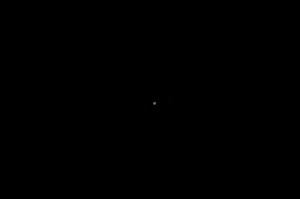 This first shot is right out of the camera, so everything looks reeeally, reeeally small.  These guys are, after all, a reeeally long way away.  What you have to do is click on the image to get a larger view so you can see what’s there.  The fourth moon is on the right side of Jupiter and you have to look really close. 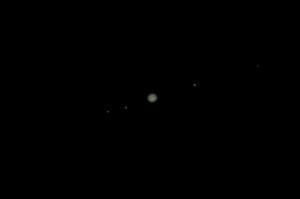 Now you may be able to see it a little better.  This image is a pretty good size crop of the original above.  Again, when you click on the images you can see much larger versions.  Now, these weren’t taken with a telescope which would have gotten a closer view, but with a camera and lens combination totaling 1800mm.   It’s pretty amazing, I think, to be able to see this much of something so far away.  Similar to the moon shots a few nights ago, there’s so much out there we either can’t see or just don’t cause we aren’t paying attention.

Please do click on the images above, it makes them bigger