We passed through the Lemaire channel at sunrise on what would turn out to be one long day. 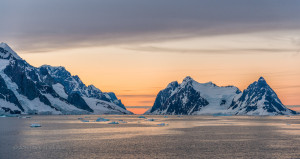 To give you an idea of how long, the above image was taken as we were entering the channel at 3:53 A.M., approximately 35 minutes before sunrise!

The Lemaire Channel is a 7 mile long by 1 mile wide passage from Cape Renard to Cape Cloos.  It separates Booth Island from the antarctic continent.  At it’s narrow point the channel is only .5 mile wide.  Needless to say, the ship’s bridge was closed to visitors during the passage.  The mountain peaks on either side top out at just under 1000 feet, so to say it’s dramatic would be an understatement.  Especially at dawn! 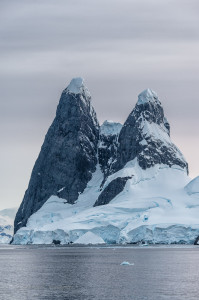 The channel was first discovered by the German expedition of 1873, but Gerlache was the first to navigate it in 1898, naming it in honor of Charles Lemaire, a Belgian explorer of the Congo.  Not really sure how that relates to Antarctica, but whatever? 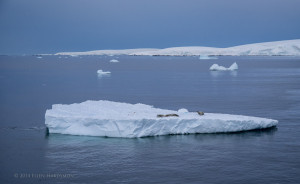 The channel was also a place where we saw seals hauled up onto ice flows, just watching the world go by.  It’s hard to tell at this distance, but I think these are crabeater seals.

And to sum up the notion of this one long day …… 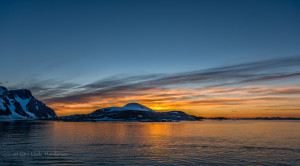 Tomorrow you’ll get to see all that we managed to cram into those hours between sunrise and sunset.

don’t forget, to see larger images, just click on them!