Staying in the Future 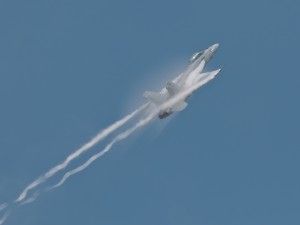 The McDonnell Douglas F/A-18 Hornet.  Just another bee buzzing around the sky in Dayton last weekend.  This follows on the heels of yesterday’s aircraft, the F-16.  The F/A-18 was first flown on November 18, 1978 and finally introduced on January 7, 1983.  This aircraft is still active today.  The Hornet is a carrier capable, supersonic multirole fighter.  It appears our military are big on multirole aircraft as a lot of fighters are described that way.  And, just as yesterdays fighter, the F-16 , is used by the Thunderbirds, The F/a-18 has been used by the Blue Angels since 1986.  Guess who showed up at the show last weekend, why… it was the Blue Angels!  So in todays slideshow, not only do you get to see this solo Hornet here, but a few more images of the Blue Angels. 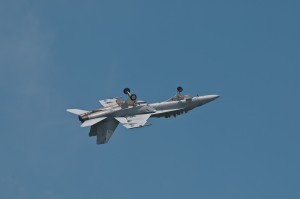 Now here’s a graceful photo of the F/A-18.  When an aircraft takes off and is airborne the landing gear are retracted – they call this “wheels up”.  So is this “wheels up”??  Well the wheels are pointing up, but they’re still down, or something like that.  He was doing slow rolls with the landing gear down to demonstrate the slow speed maneuverability of his aircraft.  Of course having the wheels down, or is it up???? slows things down as far as air speed goes.  But then as you can see by the first image…..she goes pretty fast too!!

Now you must click on either image to see todays slideshow!