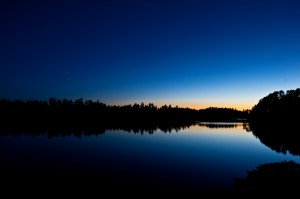 Have to start here.  As the sun has gone below the horizon, the sky begins it’s transition.  You can begin to see the first hint of stars. 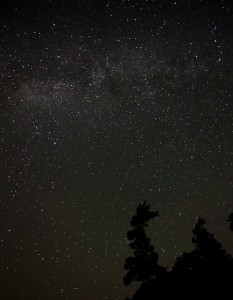 Once the stray light is gone for the night, you begin to see just how many stars are in the sky.  With all the light pollution we have at home you just can’t see all that’s there.  At the top of the image you can make out the large cluster of stars, the Milky Way. 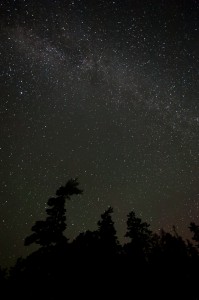 Just moved to the right a little and here is the continuation of the mass of stars. 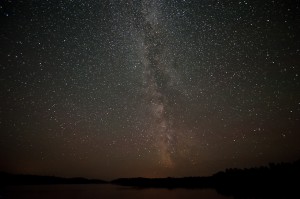 Ok, here’s the whole deal, well all that I could capture anyway, because it extends way over your head, dominates the sky.  With the long exposure – 46 seconds at F2.8 and ISO at 2200 you still see some glow at the horizon, even though it’s just after midnight.

And finally, the star trails.  40, four minute exposures, stacked in photoshop.  It’s making a circle because it’s pointed at the North Star.  The earth is rotating on it’s axis with the North Star directly overhead.

This entry was posted in Night Sky, Traveling.