Slowly Flying Back to the Past 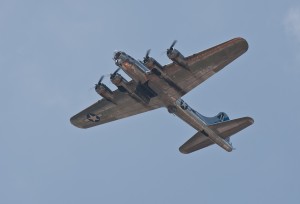 The Boeing B-17 Flying Fortress.  An iconic aircraft from WW II, first flown on July 28, 1935 and introduced in April 1938.  An interesting story about the evaluation of the prototype B-17.  The evaluation took place at Wright Field in Dayton Ohio and placed the Boeing heavy bomber up against the Douglas DB-1 and the Martin 146.  The evaluations continued and later, in October 1935 the prototype crashed.  As a result the Army Chief of Staff cancelled an order and instead ordered 133 of the Douglas DB-1’s.  However, the Army Air Corps remained impressed with the Flying Fortress and in early 1936, ordered 13 aircraft for service testing.  And do you want to know how much each plane cost????  $99,630.00.  The Douglas DB-1 was quoted at $58,200 each for an order of 220!  Hard to beat

As with all these aircraft from this era, they show so much better on the ground.  Not particularly fast, especially when you consider the last 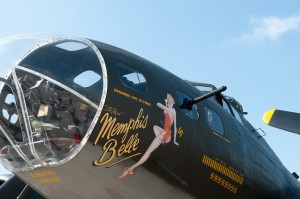 two aircraft we’ve looked at.  But up close, an elegant looking old Dame.  Look closely at the ball turret on the bottom of the fuselage.  It really is smaller than it looks.  We had the opportunity to get right on the ground and have a really close look at it.  Not someplace you want to be.  Can’t even imagine spending hours in that little ball fighting off the luftwaffe.  At its peak during WW II the numbers of operational B-17’s reached in excess of 4000!

To see more of this beautiful Aircraft, just click on one of these images