I’ve talked a bit about the snow geese in Bosque the last few weeks.  In reality, there were several different species of geese. 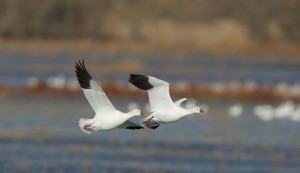 These are a pair of Ross’s Geese.  They differ from the Lesser Snow Geese that dominated at Bosque.  They are a bit smaller overall with a small rounded head and a stubbier bill. 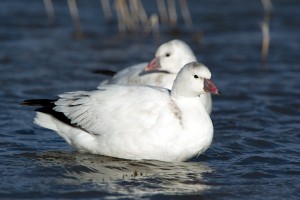 You can see a little better in this shot.  They also have a much smaller “grin patch”…. 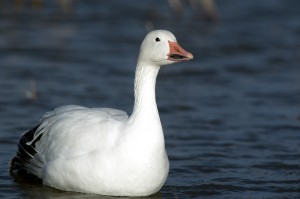 … and for comparison, here is one of the Snow Geese you may normally see.  The dark area along the bill is the “grin patch” which is almost nonexistent on the Ross’s Goose.  He’s always smiling, the Ross’s Goose, a small frown.

In the air, if you watch closely you can distinguish the two by the  sometimes erratic flying of the Ross’s Goose, swooping and diving.  Maybe it’s just easier with that smaller body!?!

I believe the two in the top photo are adults, while the two in the center photo are juveniles since they still have a bit of coloring, not pure white, and aren’t showing as much of the blue/green at the base of their bills as the top two are.

Goose lesson for the day – click on these gooses and get a better view!

This entry was posted in Birds & Wildlife, Bosque.