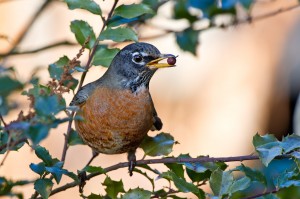 A funny thing happened while I was out shooting the other day.  First, the hawk swoops in and scares the living daylights out of everybody.  Then, just a short while later not 20 feet from me a whole passel of robins descend on a poor unsuspecting holly bush, plucking every last berry off.  There must have been twelve or fifteen and they didn’t care a whit about me being so close….. they was hungry!  I was actually surprised to get them in focus, being so close and I had to twist all around making some kind of commotion, but nothing scared them off.  At least till they were done eating!  Sorta looks like he got the cherry on top.