Rained this morning.  No, I mean RAINED……alot…..really hard too, like more than an inch and a half in less than an hour.  So what to do when it stopped – get wet!  Up the road there is a small stream and waterfall, it’s more than a rapids but  pretty small when it comes to waterfalls, especially when compared to the really big ones.  But it’s close and it’s fun to shoot.  Over the past couple of years I’ve photographed it several times, at different times of the year.  It normally doesn’t run a huge amount of water as you can see below – 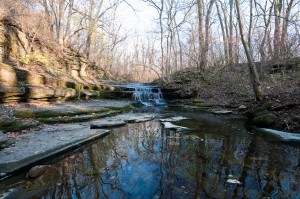 Here it is in late November.  Not pretty, actually it’s kinda grim. 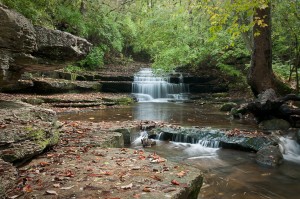 Ok, so here it is in September.  A little better, still some green on the trees, a few leaves scattered on the rocks – nice calendar picture, right.  But not a bunch of water at either of these times of year.  Of course it is pretty dry during these months though.  What about spring or early summer?  What about this morning?!? 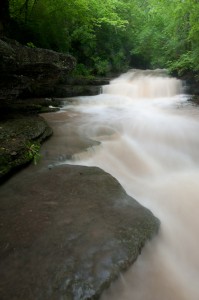 Now that’s some serious water!  Leaves are all filled out, just rained so colors are a bit more saturated, and now the water is interesting, really interesting!  Way cool! 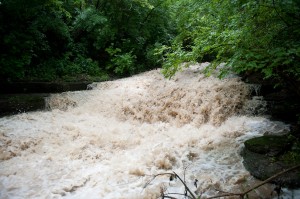 Now here’s a little photography lesson…..real little actually.  Notice in this photo how violent the water looks.  Really gives you an idea about how fast the water was running – really fast.  The aperture being set at f2.8, which is wide open, allows a lot of light in thru the lens which in turn allows for a fast shutter speed, freezing the action.  Thus, violent, fast water!! 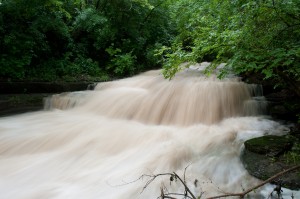 These two photos were taken 17 seconds apart, with the camera on a tripod, so I didn’t move it from the previous photo, same position, just different settings.  This one is set absolutely opposite of the other.  Set at f22, the lens aperture is closed down as far as it will go, so not much light getting thru that small hole, so longer shutter speed to get the correct exposure.  Now we have water that looks positively creamy.  Some say it looks like cotton candy. 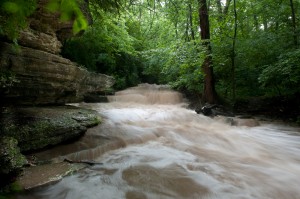 That’s the way I enjoy shooting moving water, be it in a stream, river or waterfall.  That creamy look is what I just love.  Which do you like?

I’ve added a seperate page of this “water feature” in the landscape gallery, just too many neat photos to put up on this page, so go on over and have a look at the chapman rd. waterfall

and don’t forget, you can click on the above images to see them bigger & better

This entry was posted in Landscape, Waterfalls.