Beautiful morning to start our introduction with the puffins.  But as usual with the weather here by afternoon the clouds and a few spits of rain showed up.  Didn’t dampen anyone’s spirits though. 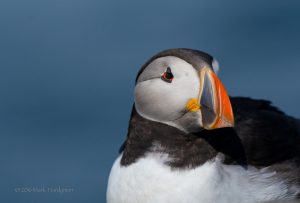 Some call it the “the Clown of the Sea”, with the colorful bill during the breading season.  Just a spectacular sea bird!

We had lots of chances with individual birds today showing off for the crowds.  We landed on two of the Farne Islands, Inner Farne and Staple Island.  As of 2012, there were about 36,000 pairs of Puffins on the Farne Islands …. seemed like a whole lot more, flying everywhere, bringing small fish in for the chicks. 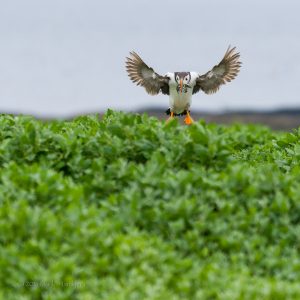 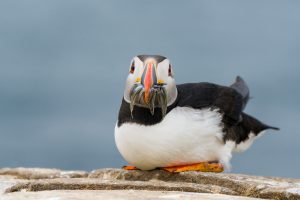 That’s a mouthful.  They have to be quick because once landed, the gulls will swoop in and steal the little fish.  Too lazy to do the work themselves, I guess. 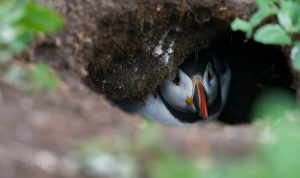 To protect themselves and their young, the puffins nest in burrows, dug all over the island.  If you see an adult in and out of a burrow, it’s a good bet there’s a chick in there.  Once the egg hatches, the chick will fledge in about 40 days.  The parents abandon the chick after it has fledged and soon after the young head out to sea under cover of darkness.  Within a short time, the adults make a coordinated escape to sea as well where they will stay until next breading season.

be sure to click on the image to see a bigger version!

This entry was posted in Birds & Wildlife, Scotland, Traveling.