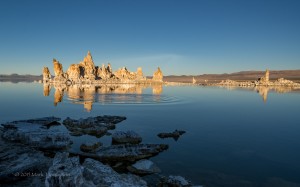 Mono Lake lies just east of Yosemite National Park in eastern California.  It is a shallow saline soda lake with a salinity 2.5 times that of the world’s oceans.  The lack of an outlet causes a high level of salts to accumulate.  One of the things that make Mono Lake so interesting are the tufas that have formed, mostly along the edges of the lake.

The best description I’ve found for these formations is on the mono lake website.  To quote the site –

“Tufa is essentially common limestone. What is uncommon about this limestone is the way it forms. Typically, underwater springs rich in calcium (the stuff in your bones) mix with lakewater rich in carbonates (the stuff in baking soda). As the calcium comes in contact with carbonates in the lake, a chemical reaction occurs resulting in calcium carbonate–limestone. The calcium carbonate precipitates (settles out of solution as a solid) around the spring, and over the course of decades to centuries, a tufa tower will grow. Tufa towers grow exclusively underwater, and some grow to heights of over 30 feet. The reason visitors see so much tufa around Mono Lake today is because the lake level fell dramatically after water diversions began in 1941.”

What you see in the photo above is a formation of tufas near the south end of the lake. 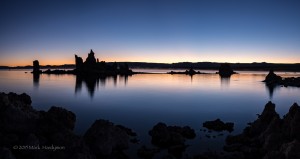 They become a bit more dramatic as the sun sets, and then again just before sunrise.  These shots are facing east looking across the lake.  By turning back west …..

The snow covered mountains in the distance form the eastern edge of Yosemite National Park.  More tufas in the foreground that became visible as the lake level has gone down steadily since 1941 due to water diversion.