My last morning in Death Valley.  I hadn’t really thought about where I might go for sunrise, so when I got up, I thought maybe Zabriskie Point.  It’s very close and can be an amazing view given the right conditions.  Being close had as much to do with it this morning, so off I went.  On the way, I noticed, in the lightening sky, that there were some clouds which really make the sunrise way better.  It did not disappoint! 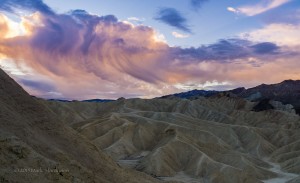 This was actually not the “preferred” view.  This is looking East and a bit south, almost right into sunrise.  Normally, you would shoot the other way, but when I saw this cloud developing, well, there was no question.  Nice sky!
Today, we travelled west to Lone Pine California, at the base of the Eastern Sierra.  The fascinating thing about this is we left Death Valley, where Badwater Basin is the lowest point in North America at 282 feet below sea level.  Upon arriving in Lone Pine, we were at the base of Mt. Whitney, the highest point in the contiguous United States at 14,505 feet.  84.5 miles from one another! 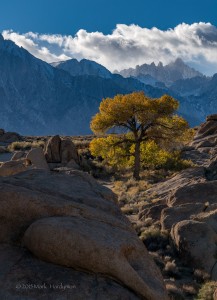 This was taken in a place called Alabama Hills, just west of the town of Lone Pine.  Just above and to the right of the tree is Mt. Whitney.  The summit is the highest peak on the right with two smaller peaks to it’s left.  The Alabama Hills are was named after the Confederate warship, C.S.S. Alabama.  The area has been used for years and years for filming many movies and TV shows. 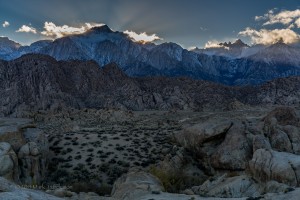 Just after the sun has fallen behind Lone Pine Peak.  At 12,949 feet, it marks the eastern boundary of the John Muir Wilderness.  To the right, is Mt Whitney, with the Alabama Hills area in the foreground.

This entry was posted in Death Valley, Landscape.