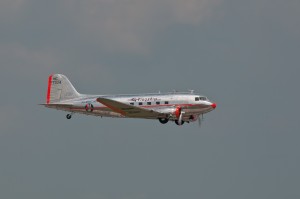 Yesterday we had lots of fast flying jets and upside-down, smokin’ Texans all over the sky.  But about the same time that North American was starting to produce those AT – 6 Texans, Douglas started building the DC-3.  In fact the first flight of the DC-3 took place in Santa Monica California on December 17, 1935.  The man who pushed the Douglas Aircraft Co. toward the design of the DC-3 was C.R. Smith, president of American Airlines.  This was a case of the airlines going to the manufacturer with what they needed and seeing if Douglas would/could build this plane.  You can read much more about the birth and history of the DC-3 here –http://www.nzwarbirds.org.nz/dakota/history.html 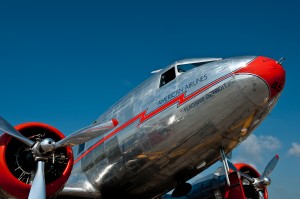 This particular aircraft, American Airlines, Flagship Detroit, is the oldest flying DC-3 today.  And she’s a beauty!  To quote from the Flagship Detroit website – ” Flagship Detroit, manufactured in 1937, was the 21st of American Airlines fleet of 84 Douglas DC-3’s, operated from 1936 to 1947.  American accepted delivery of Detroit on March 2, 1937.  It was Douglas DC-3-G102, MSN# 1920 with NC 17334 registration.” She flew last weekend low and slow over the field.  No smoke, no upside down flying or loops.  But where she really shined was on the ground.  A wonderfully restored aircraft opening a window on what aviation was like back in the 30’s, 40’s and beyond.  The Flagship Detroit Foundation website can be found here for those interested in learning more about this beautiful aircraft – http://www.flagshipdetroit.org/FSD/Flagship_Detroit_DC-3.html