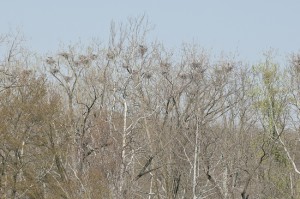 Click on the image above to see more!
Just up the river from our house, there is a rookery of Great Blue Heron nests high up in the trees. Until this year I never had a lens quite long enough to photograph here. As it is, I could still use more. It seems no lens is really long enough! The weather this morning was beautiful, so I thought I’d better get up there before the trees really started to fill out. During the summer you would never know these nests were there. There was actually a fair amount of activity with the males venturing out collecting sticks to bring back for their mates. The females are left to do the building part – what’s that tell you? I also met a new friend, Wendy, who was also here photographing. She heard about the rookery a short time ago and spent yesterday morning here as well. It’s always nice to meet up with new people interested in photography, nature and the outdoors! 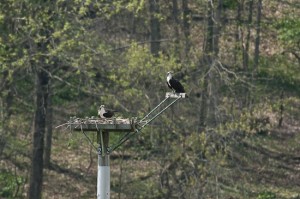 After spending some time with the Herons this morning, I took a short road trip to the top of Alum Creek reservoir where there are several Osprey nests set up out in the middle.  Not much activity since it was the middle of a hot afternoon.  They were just hanging around home. 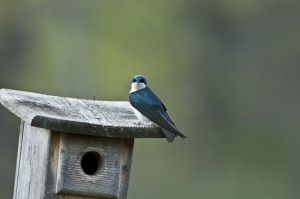 From there I headed down to Mud Hen Marsh.  I’ve driven by it often but never stopped in.  It’s a wetlands area with a gravel path leading back to a couple of small ponds.  As you can see, they have a bunch of bird houses set up along the trail.  This one just happened to have an awful pretty Tree Swallow sitting on it.  He and a bunch of his friends were flying around catching insects. 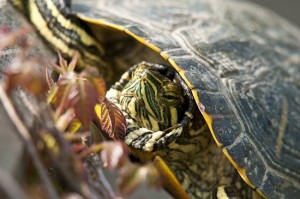 While poking around the small spillway I stumbled across this guy sunning himself up on the top.  He didn’t have much to say though. 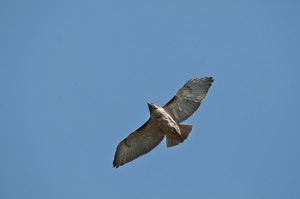 While trying to hold a conversation with the Mr. Box Turtle, this Red Tail Hawk started circling above us, probably looking for an early dinner! 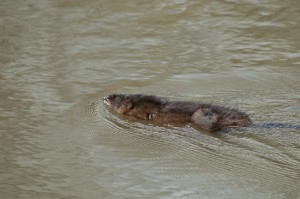 So, while I’m sitting there chatting up Mr. Turtle, watching the Red Tail, this Muskrat swims right up to the base of the spillway, climbs over a log and up the spillway he goes, into the pond on the other side.   Never said a word!

So, as you can see, it was a fairly eventful (Tax) day visiting with lots of critters out enjoying this fine spring weather!!

To see larger versions of the above images, just give ’em a click!