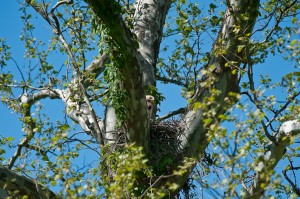 When we last visited our mother hawk, she was resting comfortably on her little herd of eggs.  Hawks will usually lay one to five eggs each year.  Both Mom and Pop will incubate their eggs for about four or five weeks, then …. voila!  Hawklings!!  Well, baby hawks. Actually, baby hawks are sometimes referred to as “eyases”, although the term specifically referes to falcons, it can be generally applied to hawks as well.  But for now, we’ll just call them hawklings!  Now it looks like there may be a nest full, although we don’t know how many yet.  Over the last couple of days, she has been up out of the nest as you can see by these photos.  One evening it looked as though she was feeding the little hawklings.  So now we wait again to see when these little guys get big enough to pop their little heads up out of the nest. 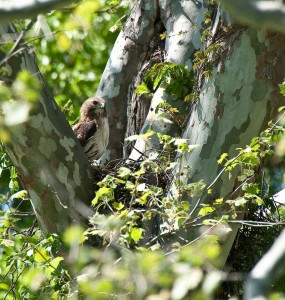 It’s usually about six weeks before the little hawklings fledge.  That means they have grown enough feathers to begin to learn how to fly and are ready to leave the nest.  So we figure maybe the middle of June we’ll see the young fledges, slightly larger hawklings, venture out on their own.

Now something that really suprised me.  The red tail hawk’s scientific name is  Buteo Jamaicensis.  The scientific name comes from the Latin word buteo, meaning a kind of falcon or hawk, and the Latinized name for Jamaica, West Indies, where the first specimen was collected for study.  Of course the common name refers to the reddish color commonly seen on their tails.  These guys are found all over North America, Central America as well as the West Indies.  I guess I never thought of them that far south.  Learn something new everyday!

Enough of the biology lesson.  Today I have added another gallery to the wildlife portfolio, a second batch of Ohio Birds.  And, as always, if you click on the above images you will see a larger version.