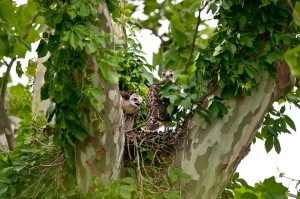 When we last left our Hawks nest, we had just the smallest of youngsters, barely looking over the edge of the nest.  But now, we have real Hawklings (as I’m calling them), up and roaming around the nest. 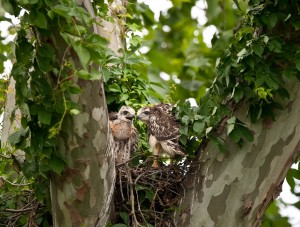 After hatching, the young ones will fledge (have matured enough to have functional wings and be ready to fly) in about 45 days.  We last visited a little more than a month ago, so I’m guessing we may see the little buggers up and flying within about two weeks 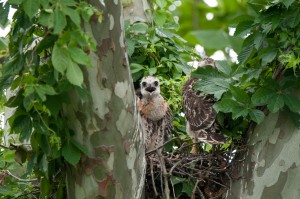 They say that the males mature a bit faster than the females.  In watching these two it looked to me like the coloring and markings of the one on the right were a little farther along than the one on the left.  Not very scientific, but the looks of these photos I say we have a male (on the right) and a female (on the left).  The whole time I was watching them, the apparent male would put himself in front with the other ( the female) staying to the back of the nest.  Seems logical.  Although in the photo above it looks like our little boy is a bit embarrassed by his sisters squawking, and is hiding behind the leaf. 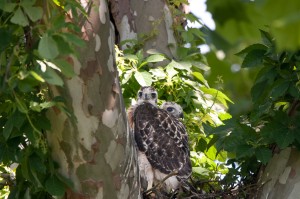 An interesting Hawk note I found on a Mr. P. Frost’s website in the U.K.

“To catch the rattlesnake, the hawk will approach the snake by walking with its wings outstretched making it look large & threatening. As it get closer it will bring its wing tips round to the front, so they are the closest point to the snake. When the snake strikes at the wing tips, which have no blood supply, so there is no risk to the hawk, the Red-Tail strikes out with its feet catching the snake below the head. The snake will usually be eaten whole.”

So if you’re a rattlesnake and you think you’re safe from these little guys, think again!

as always, you can see these images larger by just clicking on them