Along with El Capitan, Half Dome is considered one of the icons of Yosemite.  A granite dome rising more than 4700 feet above the valley floor with one side a sheer face while the others retain the smooth round appearance of a dome.  It was formed by molten rock that solidified underground into granite.  With the movement of the tectonic plates, the granite was forced to the surface as the whole Sierra chain of mountains was formed.  Years of erosion and the arrival of the glaciers helped to shape what we see today. 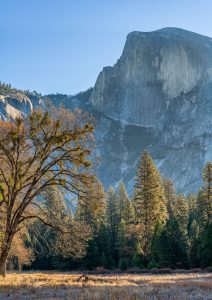 As seen from the valley floor, it makes for an imposing figure.  Originally called “Tis-sa-ack”, by the Native Americans in Yosemite, it means cleft rock.

“Tis-sa-ack” was the name of a mother in the native lore, and the face seen in the rock of Half Dome was supposed to be hers. 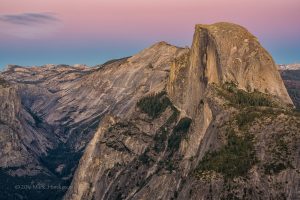 A completely different perspective from Glacier Point, being almost as high and to the side, reveals the dome shape of the back half.  Just after sunset with the nice pink/blue sky and the warm light on the face.

This entry was posted in Landscape, Traveling, Yosemite.