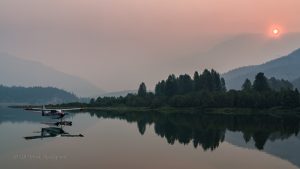 Early morning at Green Lake in Whistler B.C.  The winds had shifted over night and the smoke from the forest fires about 130 Kilometers to the east descended on Whistler.  It looks a little like a foggy morning but it’s the smoke.  You can barely see the outlines of the mountains in the distance, whereas the day before it was bright and beautiful.

The one thing the smoke does do is reflect the early morning sunlight giving the scene that warm orange light.  Coupled with the still air and the almost mirror like surface of the lake made for a very surreal scene.

This entry was posted in British Columbia, Landscape.