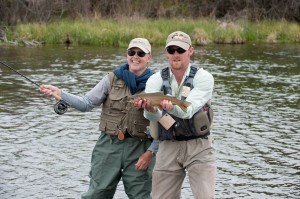 The days just keep getting better and better.  No shutouts today!!  Beautiful morning with a bright clear sky, crisp clear air, what more could you ask for.  I guess that would be fish….right?  Well we got ’em.  The activity picked up later in the morning with a fresh hatch.  Hatch you say, what the heck in the world is that.  Well the fish gotta eat you know, and the menu consists of insect larva.  They hatch in the creeks and make their way to the surface, but on the way  many become breakfast for the rainbow, brown and cutthroat trout.  The lucky ones that do make it to the surface are quickly scarfed up by the hundreds of tree swallows dive bombing the surface of the creek.  Ever catch a bird on your fly??  Well, yes that’s happened before too!  For the second day in a row, Tucker (that’s him with Glen in the photo above) sure earned his keep making sure we had everything we needed….. including a fish!  Great guide! 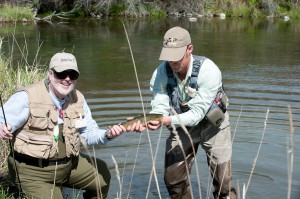 Steve’s was so big it took two to handle it…….. ok, maybe not 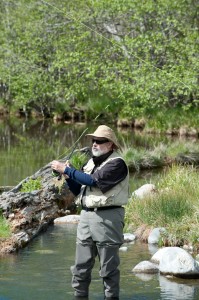 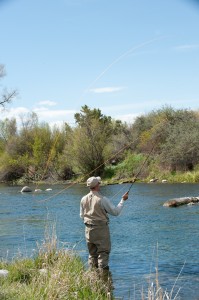 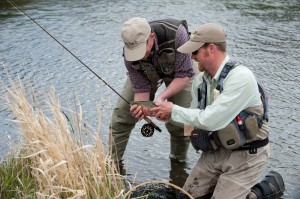 ok…which one of you is holding this fish??? 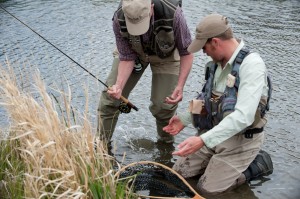 Oops…..Tucker thought Dave had it 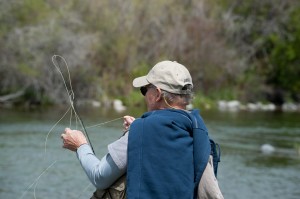 ….and sometimes, the fish just mess with your line