So the adventure begins.  Our flight from Punta Arenas, Chile was a short 2 hour flight across the Drake Passage.  That’s what really distinguishes this expedition from others since the only other way across is by boat.  The Drake is considered one of the roughest seas in the world and the trip from the southern tip of South America to the Antarctic Peninsula is two and a half days.  A nice easy 2 hour flight and we’re there. 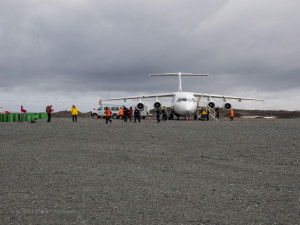 The flight lands on a gravel strip ( the Teniente R. Marsh Martin Airport! ) on King George Island in the South Shetland Islands, just north west of the Antarctic Peninsula.  There are three research stations within a small group there.  The Frei Station, a Chilean base, Bellingshausen, Russian and Great Wall, Chinese.  The Frei station was opened in 1969 and is now the primary Antarctic base for Chile.  The airstrip provides a means of transport to many of the bases in the area. 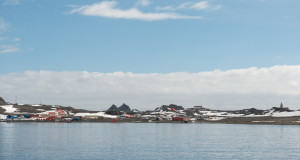 Frei and Bellingshausen from our ship, the MV Ocean Nova.

After a short walk from the landing strip down to the beach, we took a zodiac ride out to the ship, ready to start our voyage south through the Bransfield Strait. 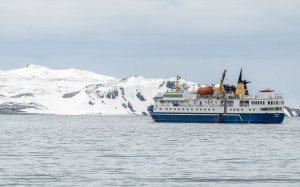 We arrived on board shortly after noon to begin the cruise down the Bransfield Strait to our first stop in the upper Gerlache Strait, about 240 kilometers as the crow flies.  The seas were calm and the temperatures mild as we sailed toward sunset.

The views were spectacular.  The hardest thing to get used to was judging distances and size as the landscape is so huge it’s hard to get a reference.  What may seem like only a mile, in reality may be ten! 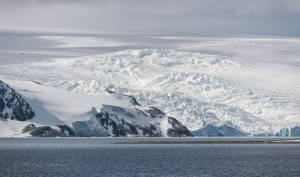 So as we sailed onward and the light faded to sunset, the sky lit up with the most beautiful colors.  We couldn’t have asked for a more perfect ending to our first day in Antarctica! 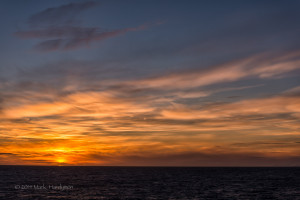 please click on the images to see them bigger!