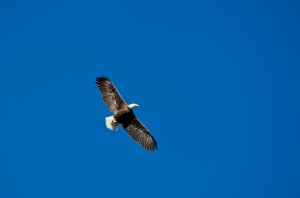 Not often, in Ohio, do you get a visitor like this!  Beautiful sunny day, a little cool but very clear and I’m set up in the usual places with the usual visitors.  It’s so much nicer when the sun is out, all the images just look better.  The first of the high flying birds of prey to come around were a pair of Red Tail Hawks.  Now if you’ve been following me through the summer, you know we had a pair raising two young ones, so they’ve been hanging around for quite awhile.  As the sun moved around south and west, I moved as well.  That’s when the Eagle showed up.  There is a nest south of us along the river at Highbanks Metro Park.  Occasionally they come north, mostly along the river.  I have yet to see one venture up our way, least ways not until today!  He made two lazy passes over the house then drifted off to the east.  Wish he would have come down a little closer, but beggars can’t be choosers.  It’s interesting, when we go up north to Canada and the Boundary Waters we see tons of Eagles and don’t think much about it.  They’re so much a part of the ecosystem there.  But here, it’s another story.  I haven’t been this excited since the Pileated Woodpecker showed up a couple weeks ago. I put together a slide show with a little bit of everything in it today, including the Eagle and the Hawk, so click on the image and enjoy.