From our morning stop in Paradise Bay, we headed a little north to the Errera Channel where lies Cuverville Island.  As with much of the area, Cuverville Island was discovered by Gerlache’s Belgian expedition of  1897-9, and named after a Vice Admiral in the French navy.  Heck, if I had been around at the time, I might have gotten something named after me! 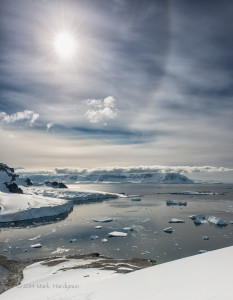 Ice crystals form a halo around the sun overlooking the bay on Cuverville Island. 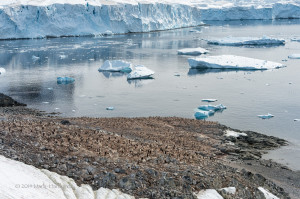 The island is also home of the largest Gentoo penguin colony in the region at approximately 4800 breeding pairs.  That’s a lot of penguins! 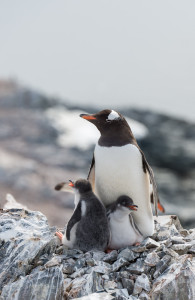 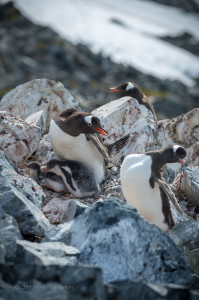 With lots of chicks.  Again we see them nesting high above the beach in the rocks trying to keep the family dry.

Anytime we were given the opportunity to go up, I went.  Here a few of us made the long steep hike to the top of one of the “cliffs” nearest the beach.  We went up in two groups, the going slow partly because of the steepness but also snow that was knee deep. 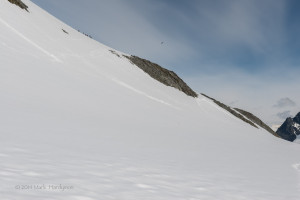 If you look closely in the upper left corner you can see group number one on the way, way up 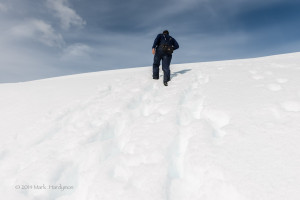 This will give you an idea of how steep.  The camera is level here shooting into the side of the hill – gotta go up!  Was it worth it?

Yep!  We were out of time because of the long trip up so only had a few minutes there.  This is a 5 image stitch showing the backside of that little hill we climbed.  I really liked it in black & white. 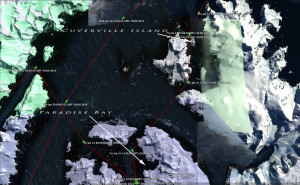