After traveling through the night, we arrived at Cierva Cove in early morning.  Named after Juan de la Cierva, inventor of the Autogiro, it lies within Hughes bay at the north end of the Gerlache Strait.  The cove was filed with sea ice and an abundance of icebergs.  We had a mixed sky with some very dramatic dark clouds that set off the blue and white of the icebergs.  Cruising in the cove in zodiacs, we got a penguins eye view of this dramatic seascape. 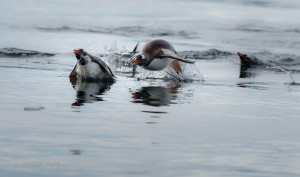 Within the cove we saw a dramatic difference in the color of the ice, from pure white to a deep blue and even crystal clear.  The differences come from the age and amount of compression the snow and ice have undergone through the years.  The white shows the new snow and ice that still has a lot of air entrapped within so the light reflected is white.  Just like the fresh snow we see here.  The blue ice is much older and has undergone years of compression, layer upon layer of snow pushed together over hundreds, even thousands of years.  Much less air is entrained within these so the light reflected is blue.  Often times the blue icebergs have at some recent time flipped over reveling the much older bluer ice usually submerged.  And then there’s the clear ice, the oldest and hardest of all.  Some of the clear pieces we saw may have been as old as 10,000 years! 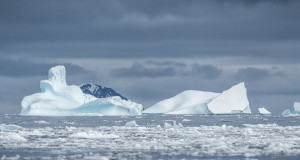 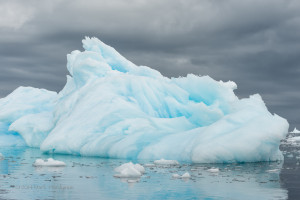 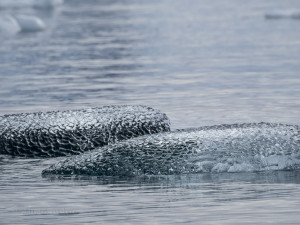 Ice wasn’t the only thing in Cierva Cove, as you can tell by the porpoising Gentoo penguins above.  The land around the cove was also home to Chinstrap penguins, who get there name from the small black stripe under their chins. 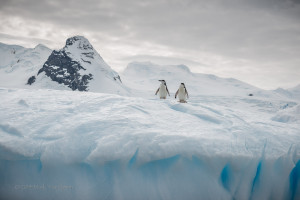 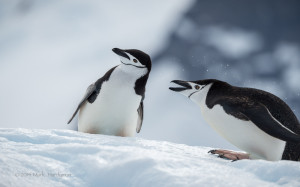 Finally, the Leopard Seals, hanging out on the pack ice, usually near penguin colonies, for obvious reasons.  They also feed on fish and krill and are built for speed.  Of course you couldn’t tell that from where we were as they were usually just laying around like an old dog, occasionally raising his head to see who these strangers were floating by. 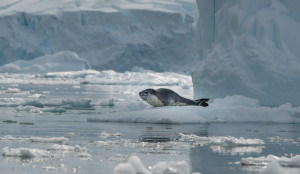 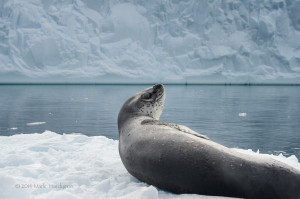