There are some really interesting buildings in downtown Chicago.  It was fun discovering these new to me places, then adding the challenge to photograph them in an interesting way.  That also made processing them equally interesting.  Here are a few examples. 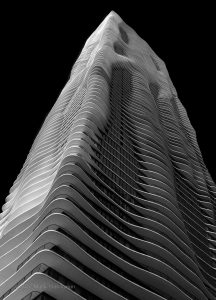 The Aqua Building is one of the most interesting I’ve come across, with the incredible shapes and curves it almost seems alive.  Here it was fun for me to convert to black and white, darken the sky to show off the extreme contrast between the white building and the dark sky. 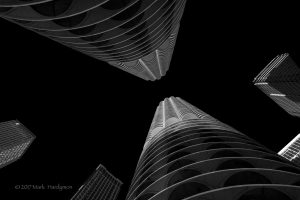 The Marina Towers, two round, scalloped towers designed in 1959 and built between 1961 and 1968 stand out amongst the newer glass and steel buildings of downtown.  Really unique design, this image also converted to black and white shows the contrast not only to the dark sky (blue sky in the color version) but also with some of the surrounding buildings. 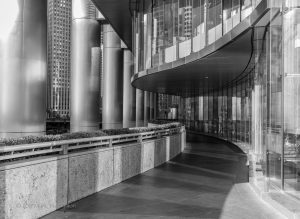 This walkway of the Trump Tower, along the riverside shows interesting use of curves, glass and the columns.  Again, I chose black and white because of the feeling of the big city that harkens back to an earlier time which the B&W just accentuates.

This one needed to be color!  Looking back west up the Chicago river, the early morning light really brings out the colors of the city as it slowly awakens.

be sure to click on the images to see them larger!

This entry was posted in Architecture, B&W, Downtown, Traveling.