Can These Guys Fly, or What? 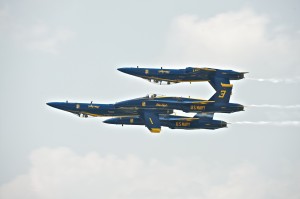 My good friend Ron and I spent all day yesterday roasting in the sun at the Dayton Air show.  Really nothing new, we used to spend way, way too much time roasting in the sun at race tracks all over the place.  We just wern’t working on the race car this time.  The Blue Angels were the featured act this year, as you can see by the image here.  There was a whole lot more than just the Blue Angels.  To the tune of 2000 images.  I can take way to many sometimes!!  I think Ron has now confirmed just how nuts I am.  I’ve been sorting through all these files and still have a ways to go but thought I’d better get something up here. 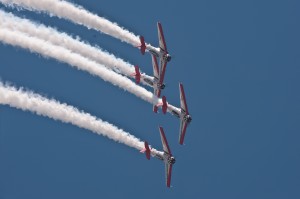 These guys are the Aeroshell Aerobatics team.  They’re flying North American AT-6 Texans.  These planes were first built in 1937 and were operational in the military up into the 1950’s.  Bet they weren’t painted like this though.  They put on a terrific show, especially considering the age of these aircraft.  Hard to compete against equipment like those Blue Angels guys have!  Beautiful planes that really stood out against the sky yesterday.

This is just a taste, so you’ll just have to keep coming back here to see what surprises from the air show pop up this week.  There’s B-17’s, P-51 Mustangs, current aircraft like the F-16 Falcon and the F-18 Hornet, even a DC-3!  Probably more of the Blue Angles and the Aeroshell team as well, hey, I got lot’s of material here and it’s gotta go someplace!!

Now all you have to do is click on the images above to see a little slideshow from each.  And remember, stay tuned!!