As you may have noticed from all the earlier posts, we were graced with the best possible weather for our whole expedition.  Even the ships crew wondered who brought all that good weather, since they seldom have that many perfect days in a row.  What that allowed on our last day, was a landing at Baily Head, a small bay off the south east corner of Deception Island.  There is a beautiful black gravel beach tucked in behind some huge cliffs and we were told that making a landing there in anything but calm good weather was impossible.  As it was it took most of the expedition crew to wrestle the zodiacs close to the beach for our landing. 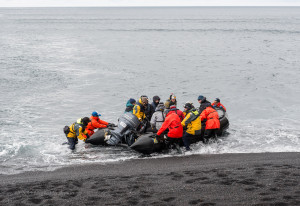 Baily head is a natural amphitheater within a 550 ft. high rocky headland, and home of one of the largest chinstrap penguin colonies on the Antarctic Peninsula.  Studies conducted in December 2011 put the totals on Deception Island at 79,000 breeding pairs with 50,000 at Baily Head.  The study also found that the populations have been dropping since the mid 1980’s, as much as 50%.  It is thought that this dramatic population drop is due to the warming climate.  More specifically with the warming temperatures there is less sea ice.  The main food source for the chinstraps is krill, a small shrimp like crustacean that depend on the sea ice for shelter and also feed on the algae that grows on and in the sea ice. 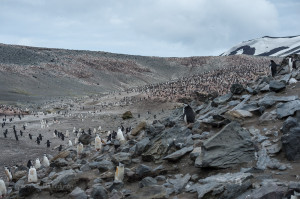 These two images will give you an idea of the amphitheater like valley these penguins call home.  It’s massive to say the least and the penguins are literally everywhere.  All those little black and white dots are penguins!  This is their breeding grounds.  Penguins are after all, sea birds.  They will spend 7 to 8 months at sea before coming here around October or November, where they build nests, generally lay two eggs and raise the chicks until about March when they all head to sea again.  Life at this rookery is all about feeding the chicks.  There is a constant stream of penguins making there way down to the beach, feeding in the water, then make that long (sometimes several kilometers) often uphill journey back to the nest. 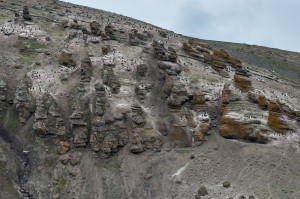 Again, high and dry are the operative words.  Can you imagine climbing up there with 2 inch legs and flippers instead of arms!?!

But at least theres fun to had in the water, they swim much better than they walk.

After a little bit of fun playing around in the water, it’s ….. 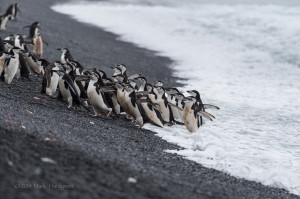 Typical day in the life of a chinstrap penguin on Baily Head. 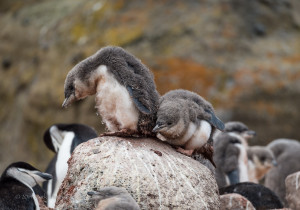 And then there’s the chicks.  Pudgy little grey fur balls, usually filthy dirty but getting ready to molt and don their little tuxedos.  That’s two of them playing king of the mountain.

Cat amongst the pigeons?

In a post a few days argo, I mentioned a certain playful fur seal we ran into.  The fur seal is the only one mobile on their flippers and can actually move pretty fast – faster than we can run.  Throughout all our landings we were given very specific instructions to stay at least 15 feet from the penguins.  If we stayed still or sat down often they would approach us, which was ok, they go by different rules than we do.  And really, during this whole time the penguins never gave us much thought at all.  The seals, we were told can be a little more aggressive, and are given double the distance – 30 feet.  If one does approach, just stand still and stare at him.  Don’t make noise, or wave your arms, just stand there.  They will usually just figure you’re bigger and more dominate, get bored and move away.  Well, on Baily Head when we were loading up to return to the ship, a young male took quite an interest in our group! 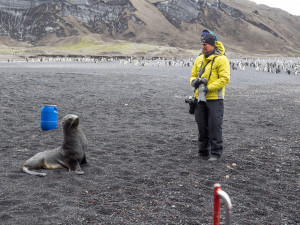 One of our group was sitting down putting stuff away, and in the second, that’s me in the yellow jacket wondering just what he has in mind.  After all that, he finally settled down, got bored and headed into the water where he kept a close watch on our departure.  In the end, all the instructions we received were spot on and our encounter with this curious young male fur seal was a parting experience we all won’t soon forget. 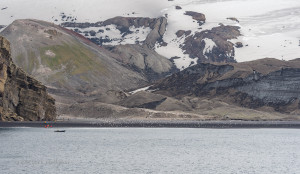 The beach at Baily Head.

Well, that’s about it, our last adventure before heading back.  The next day we were on a plane crossing back over the Drake Passage and landing in Punt Arenas, Chile.  Stay tuned though, as there are more photos and more stories to be told!

don’t forget to click on any of the images to see bigger versions!

This entry was posted in Antarctica, Landscape, Uncategorized.