Here are some more shots of the Hawk family from yesterday evening.  I cropped these, which makes the subject larger in the frame.  There is so much detail with these guys, it was almost impossible not to do. 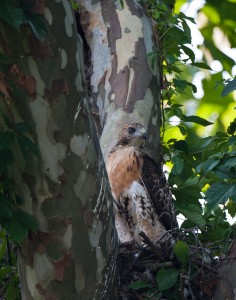 I thought this one was mama, since the female is usually larger than the male.  Sometimes up to one third larger. 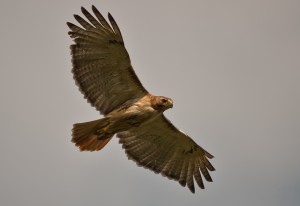 He seems a tad smaller than the one on the nest, hence, papa.  At least that’s how it looks to me. 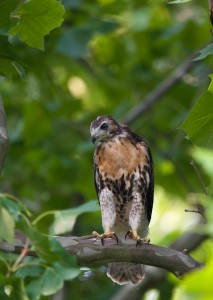 And this is obviously junior.  Handsome boy, isn’t he?

There is quite a lot of discussion about the “ethics” of post processing photos in this new digital age.  Some will say that for wildlife, don’t touch it – get it right in the camera.  Others will do whatever it takes to make the image into whatever they want.  Cropping, cloning out unwanted objects, anything that may distract from the subject, adjust exposure, color balance and on and on.  I used to do a lot more messing with the image than I do now.  I do think it’s best to get it right the first time, but there are some instances when you can so obviously make an image better in the “digital darkroom”.  The above images have been cropped a fair amount.  You can get an idea of how much by looking at yesterdays post.  I’ve also played a little with exposure and contrast although not much.  I think it can make for a better photo.  What do you think?

You know the drill, click on them for bigger & better