I’ve been playing around/testing a different camera this week, so I’ve been wandering around looking at things I take for granted.  Last night, I wanted to shoot the sunset from behind the house and I dawdled around thinking sunset was about 8:20 or so.  Well it turns out it was earlier, and I wasn’t in a big enough hurry.  As I walked out of the house looking at the sky, it didn’t look too promising until I came around a stand of trees, and there large as life, the big orange ball of the sun, clear as can be, settling toward the horizon.  Trees in the way – move down the field …. fast.  Still no good as I’m thrashing through the unmowed field in my shorts, only to arrive at an unobstructed view just as the sun goes, boop, below the horizon!  Five minutes late! 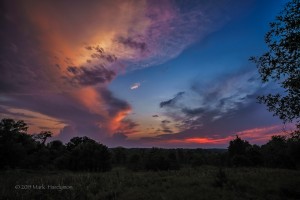 All was not lost.  The clouds were good and as the sun set further below the horizon, everything just lit up!  So next time I need to be a little earlier, and have the patience to wait for the color after sunset.

As I was leaving this morning, I had the camera on the seat with me, something I don’t normally do.  But since I’m playing around this week, I’ve been taking it with me.  Half way down the drive I look to the north west where a storm is building and wow! a rainbow!  With the rain to the north and the sun still out in the east, a perfect scenario.  And it lasted forever, allowing me to shoot it from several spots. 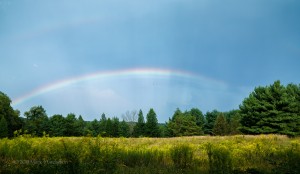 The rain’s moving in from right to left and if you click on the image, you’ll notice a bird, very small in the frame, flying under the middle!

And if you look even closer in the upper left corner, there is the beginning of a second rainbow, faint but there.

So what started out the night before with disappointment turned around into a couple fun shots.  I’m pretty sure I’ll be keeping a camera with me most of the time now!