As you know from the last post, we were up super early to start the day at the windows and turret arch.  Well, it was one of those days that just doesn’t end, but gets better.  Later in the afternoon, we set out on the trail to Delicate Arch.  If you’ve ever seen a photo from Arches NP it was probably this arch.  It’s even on the Utah license plates!  Of course we had to go early to get set up for sunset, right.  So off we go at a little after 4 on the one and a half mile trail …. mostly uphill!  Big groups of people on the way up, and by the sounds of the conversation, from all over the world.  The last few hundred yards hug the side of the cliff with a serious drop off on your left.  then, all of sudden, around the last corner, it just opens up and there sits Delicate arch, perched on the edge of a canyon with what looks like a natural amphitheater wrapped around the opposite side.  I’ve seen lots of images of this arch and no matter how good they are, none do it justice!  It was an amazing experience seeing it for the first time. 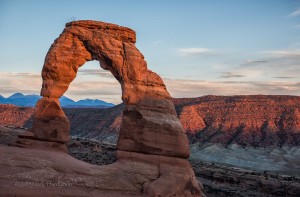 So here we sit with the time of 6:30 in our minds waiting for sunset, but wait, 6:30 was sunrise!  Sunset’s at 8:30!!  So here we sit and sit and sit.  Couldn’t think of a better place to while a way the time then here.  I told you it was a long day, neither Steve nor I realized our mistake until we were up at the arch.  Lots of people watching though, we made a rough estimate of somewhere between 150 & 200 sitting in this natural theater, waiting for sunset!

With a little time on my hands, I walked around a bit and looked back the way we came and saw a storm way out in the western sky, with lightning!!  I hot footed it back to tell Steve and while everybody was looking one way, we were looking the other.

The storm never made it to where we were, but thankfully headed to the north.

So after sunset, most of the folks headed back down the trail while a fair number of photographers hung around to shoot the arch with the milky way rising behind it. 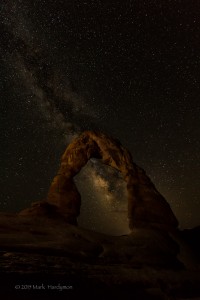 We moved down lower so we could frame the milky way through the arch.  This is a 25 second exposure to bring out the night sky and the arch was lightly “painted” with a flashlight to highlight the detail.  After we all had our fill of night photography we packed up and headed down.  I think we were one of the last to leave and it was close to midnight before we made it back to the parking area!  A long day’s night comes to an end.  Would I do it again, in a heart beat, come to think of it, there’s a good chance we’ll be doing it again, sometime in the next 5 days!

Be sure to click on the image to see bigger ones!

This entry was posted in Landscape, Night Sky.